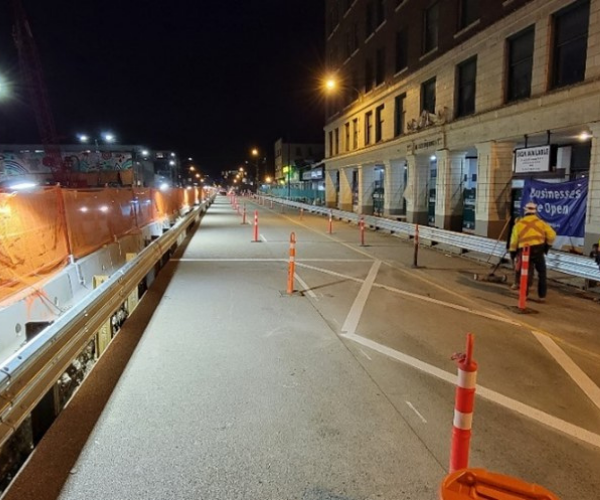 This article provides a snapshot of the design and construction of temporary decks for the Broadway Subway Project.

The Broadway Subway Project is a 5.7 km extension of the Millennium Line, from VCC-Clark Station to Broadway and Arbutus that will replace part of the 99 B-Line route, which is one of the busiest bus routes in Canada and the U.S. In total, the project includes the construction of six stations, five of which are on Broadway.  The twin tunnels for the line will be constructed using a Tunnel Boring Machine, and the underground structures are being built under traffic decks to maintain the flow of traffic along W Broadway.

Broadway is a very busy road, not only with public transportation but also with private vehicles.

Each traffic deck constitutes multiple bays of a beam-girder system with deck panels The steel structures are being fabricated in Saskatchewan and shipped to the work site as needed.

Allnorth Consultants Limited is the structural Engineer of Record for the deck and has developed these concepts in conjunction with the General Contractor.

To provide a better understanding, a pictorial representation of the construction sequence as it relates to the Mount Pleasant Station construction work is depicted below.

Excavation of north side of proposed Mount Pleasant Station

Complete installation of all deck panels and transvers beams

Visit the Broadway Subway Project website for more information, and to register to receive project updates.