Designing, developing, and constructing bridges presents engineers with numerous challenges, that typically include a variety of environmental and site conditions such as the span of the bridge and vehicle volume. All this needs to be taken into consideration, as it will dictate the type of bridge that best meets the needs of each specific site, such as a truss, arch, or suspension bridge, among other options. Beyond these design complexities, each bridge configuration and installation site presents a unique set of challenges concerning the actual erection of the bridge.

As a company that started in bridge design more than four decades ago, Allnorth is well positioned to help contractors and municipalities navigate the many complexities and challenges involved in bridge erection. From the environmental challenges of working in the icy waters of northern Canada, to the difficulties of moving, lifting, and placing bridge components that weigh hundreds to thousands of tonnes, Allnorth has the proven experience necessary to ensure bridges are built with safety and structural stability in mind.

More specifically, in recent years, Allnorth has been involved in the erection of two bridges – one arch bridge and one single-tower self-anchored suspension (SAS) bridge – that each presented several unique challenges. In examining the details of each of these projects we see how the Allnorth team was well-positioned to overcome the environmental and design challenges of each installation.

A traditional suspension bridge, like the Golden Gate Bridge, consists of multiple towers with two main cables that tie into anchors in the ground. This means that, once the suspender cables are attached to the main cable, the deck is hung from these cables. A self-anchored bridge, however, is a suspension bridge in which the main cables attach to the ends of the deck, rather than to the ground via the large anchors. The construction of such a bridge is much more challenging; without the suspender cables, the deck is incapable of supporting itself, but the cable cannot be installed without the presence of a deck. Therefore, a roadway must be built first, requiring the construction of a temporary support structure.

For the construction of the new eastern span of the Bay Bridge between San Francisco and Oakland, California, Allnorth helped navigate access constraints that made it impossible to lift the orthotropic box girder (OBG) segments into their final locations using shear cranes on barges. To address this challenge, Allnorth was contracted to develop an assembly gantry that could install the OBG segments and a number of crossbeams. For this, Allnorth provided the lifting frame, pushing frame, and crossbeam erection engineering.

The process for installing the OBG segments started by using barges to move the segments as close as possible to the installation location. From this point, the pushing frame Allnorth engineered was used to move the segments by sliding them along a temporary truss into their final location, which was usually approximately 300m. Since these OBG sections ranged from 20m to 70m long and from 500 tonnes to 1,450 tonnes in weight, the biggest challenge presented in developing the lifting and pushing frame system, was to create an assembly that could be adjusted for the various weights and geometries (Figure 1).

Figure 1. Installing a section of the OBG using the lifting and pushing frame system developed by Allnorth.

Since reconfiguring 220m of rigging is no small undertaking, Allnorth designed the lifting frame to allow for quick and simple adjustment of the loading point locations. The length of each of the slings could be adjusted using an assembly consisting of four steel bars and through-jacks. Allnorth also built a custom support stand, and permanently mounted it on a pair of barges, joined together for this purpose. To allow for reconfiguration of the lifting frame’s geometry, the custom support stand was designed to support the lower assembly, while the upper assembly was repositioned on a configuration of heavy-duty rollers.

Additionally, since some portions of the assembly were above land rather than water, a custom pushing frame was needed. Allnorth designed the pushing frame to attach to the cradle and push off the top chord of the temporary truss. Not only did this system solve the complexities involved in the erection of this world-famous bridge, but the simplicity of our solution also provided the construction team with cost and time savings.

The Walterdale Bridge: Navigating the Icy Waters of the North Saskatchewan River to Erect a Large Arch Bridge

Allnorth was named as the erection engineer of record for the Walterdale Bridge, located in Edmonton, Alberta. The bridge’s erection came with several environmental and structural challenges. First, this bridge was designed to be supported by two steel arches, each with a span of 206m. Each arch was fabricated in 21 individual segments, around 10m each, with the heaviest segment weighing 120 tonnes. The midspan of the bridge, which was 86m long and weighed approximately 1,000 tonnes, had to be assembled downstream of the bridge installation location.

Once this assembly was completed, the arches needed to be transported to the final location using two barges (Figure 2). The process to relocate the arch midsections required careful engineering to ensure the arches would remain structurally sound and that the barges would not capsize. Due to icy and low water conditions in the river, moving these arches took about a week.

Figure 2. Transferring the load of the arch midsections onto barges once the assembly was completed offsite.

While the arch midsections were assembled offsite, stump arches on the berms at the final crossing location were also assembled at the same time. To install the arch midspans on the stump arches, two heavy lifts, using strand jacks and lifting towers were required. The first midspan weighed 1,000 tonnes and had to be lifted 20m. Following the lift, each end of the arch was bolted to the adjacent, previously assembled 30m long stump arches. The lift of the second assembled midspan was 2,000 tonnes with a height of 20m (Figure 3). When the lift was complete, adjacent segments were temporarily connected using an internal bolted splice. 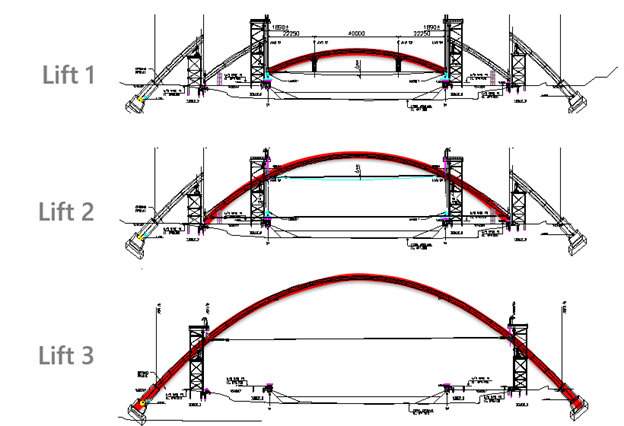 Figure 3. Drawings of the three lifts required to install the bridge arches.

Once the arches were in place, the second phase – traffic deck installation – began. In the first part of this phase, the steel substructure of the deck was installed on towers on top of the berms wherever possible. After this part of the installation was completed, the assembly was elevated for attachment to the pre-cut cables, suspended from the arch. The hanger cable pins were then installed, the support from the towers beneath was removed, and the deck was suspended from the arch.

In the second part of the deck installation, cranes located on the berms lifted steel components into place for a cantilevered installation over the river. After each cantilevered bay was assembled, a cable stressing assembly pulled the deck and the lower hanger fork towards each other in order to install the hanger pin. As each bay was completed, the erection fronts from the north and south side approached each other at the center.

All bridges, especially large and long-span structures, have unique construction challenges to consider, and as a result, require analytically sound and practical engineering solutions. Allnorth can meet these unique, and often complex, challenges with our wide array of construction and erection engineering services. Whether you are working on a fairly simple single-span or complex suspension bridge, we will work closely with your project team to determine the most cost-effective method and the erection sequence necessary to ensure a safe and stable installation.

Learn more about Allnorth’s array of infrastructure engineering services by downloading the full project briefs detailing our work with the SAS Bay Bridge Erection Equipment and the Walterdale Bridge Engineering.